The Fantastic Women of Fighting Games

Fighting games. For a genre that so often uses the framing device of international martial arts tournaments or similar world gatherings they really do not fare any better than other videogames when it comes to diversity. The most common criticism is that due to how the casts are designed tokenism is a constant gremlin, turning characters into hollow stereotypes that can border, or break into, on the offensive.

This, like so many things, these problems hit double for female characters. Despite all common sense women almost always make up less than half of a fighting games cast and other negative devices will always hit harder in a smaller pool of people to choose from.

But one fantastic thing about fighting games and their huge cast of playable characters is that eventually some wily designer will slip in a character that breaks these conventions. Characters like Venom who is both a European person of colour and gay, and not sub textual gay either it is a real and important part of his story.

When you are a feminist into video games every little character, playable or not, that gives you even a micron of decent representation feels worthy of celebration and  analysis but I have noticed that people rarely mention the wonderful women in fighting games who defy the usual models to give us characters  we can really appreciate. So I have thrown together this list of my very favourite female characters from fighting games who show that there exist more women in this genre than Kasumi and Mai Shiranui. 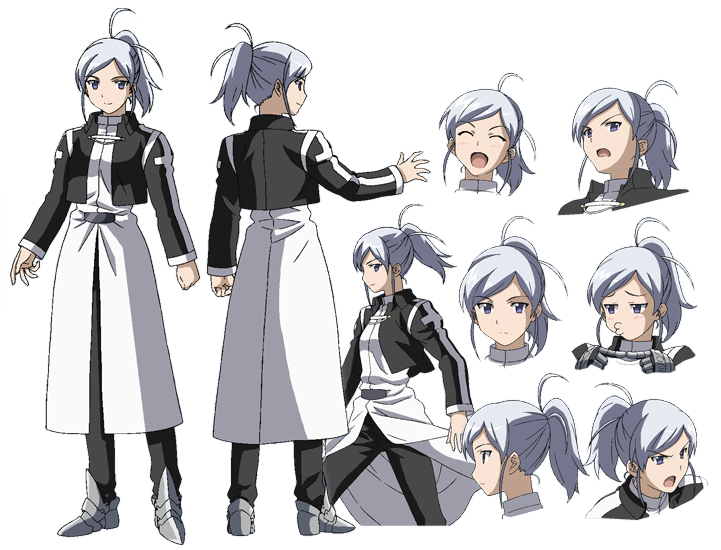 First up we have a character that was added in the most recent Melty Blood game. Riesbyfe is a vampire hunter from the Church who decided that George Clooney’s weapon from Dusk Till Dawn was not over the top enough and decided to slap a gigantic shield shaped like a double base on a jack-hammer.

Riesbyfe is also given the longest story mode out of any of the other characters in the game. She has a dialogue sequence before nearly every fight. Riesbyfe is given an appropriate style to compliment her ‘lady knight’ persona, all sensible ponytail and cool armour. Riesbyfe was chosen over a lot of other worthy characters in Melty Blood as the thing that saves her is her close friendship with another woman, Shion one of Melty Blood’s original cast, rather than just fighting skill. 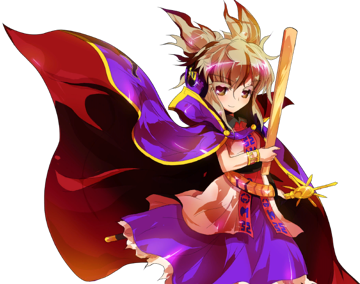 I would be amiss not to include a character who has appeared in a Touhou fighting game. Miko is based on the mythical Japanese Prince Shoutoku but as she is a Touhou character convention indicates that Miko is in fact a woman, and there was no indication that she even bothered hiding that.

This makes sense as Miko seems completely at home with being an ambitious secret Taoist prince. All her vassals refer to her as ‘crown prince’ and Miko lives up to it by stating that she would happily take over Gensokyo (were Touhou takes place) should humanity need her. It really is nice to see a character who has the confidence (and plans) of a super-villain but is portrayed as a likeable person. 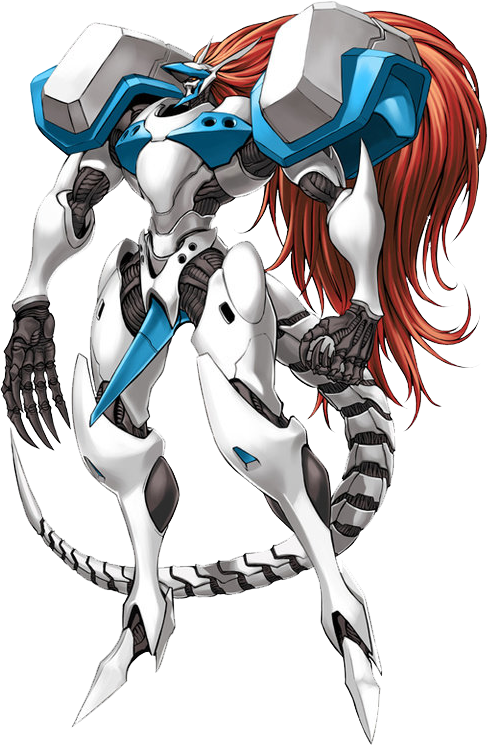 Justice is a fantastic example of a final boss character that Guilty Gear has never been able to top. While all the Guilty Gear final bosses are women the other three are all variants of barely dressed ladies not really in charge of their own life. Justice was different; as the first perfect gear she supposedly rebelled against humanity for herself, taking control of all other gears to form her army.

Justice kicked off her war against humanity by eliminating the country of Japan and nearly all of the Japanese; apparently her least favourite segment of humanity. Justice is also hands down the strongest figure in the war between humanity and gears and it takes three of humanities most powerful fighters to finally wear her down. As a player you believe that because fighting Justice in Guilty Gear was incredibly difficult. She is still considered one of the most unfair boss characters ever made for a fighting game.

Justice must be so tough because unlike all the bosses to follow her in Guilty Gear Justice is encased in armour that makes her look like a Super Sentai villain. Justice was clearly designed to be an intimidating, scary character that you genuinely fear fighting. 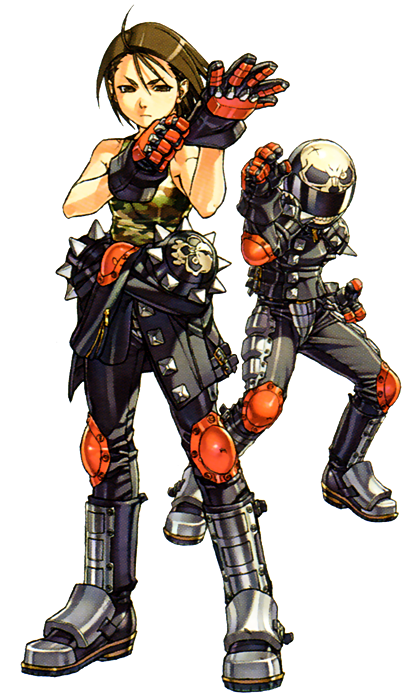 Akira seems to be one of those rare characters in a fighting game who wears what actually seems like practical clothing for a street fight. In both iterations of Rival Schools Akira is dressed in tough looking motorcycle leathers. Exactly the kind of protective clothing that would both protect you yet not draw unwanted attention if you were engaging in fights with fellow students.

In the second game Akira unites with Yurika Kirishima and Aoi “Zaki” Himezaki to form and all ladies team of considerable strength. Really any of Akira’s team is appropriate for this list but Akira gets an extra point in that donning her protective motorcycle leathers and helmet makes her more powerful in a fight. That’s a nice change from the usual pattern for how alternative costumes work for lady characters in these games. 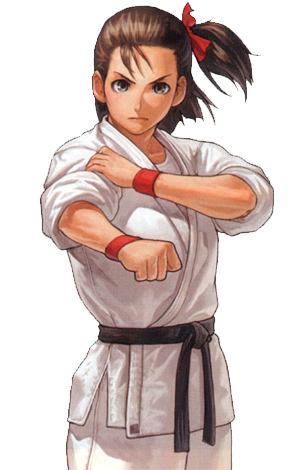 Now this is a nice change of pace. Ryoko Izumo is inspired by real life judo champion Ryoko Tani who is a two time Olympic gold medallist and seven times world judo champion. The only sad part is that the game series Ryoko appears in, World Heroes, never became very popular and Ryoko herself only appears in the last three games. Sadly the character of Ryoko Izumo never really stretches beyond: lady who wants to fight strong opponents to test her strength. Still this minimal level of development has allowed Ryoko to remain as a energetic tough fighter who while looking rather mundane next to the rest of the cast still gets her ki powered super moves. Playing as Ryoko lets a regular looking martial arts lady fight super Rasputin or Janne D’arc and win.

If you want to see for yourself, you can find an English collection of old Neo Geo games called the Neo Geo Online Collection for the PlayStation 2 that has all the World Heroes games. So hunt it down if you want to see Ryoko in action.

Vanessa (The King of Fighters)

Sometimes it seems that in popular culture life stops at twenty-five. After that you get pushed away into the background, especially in games. Not Vanessa who was thirty when she was introduced in The King of Fighters ’99 Evolution, deliberately introduced to act as a balance to all the younger characters they were adding. But the producers of KOF were not done yet, Vanessa is taller than average, a very aggressive boxer and has her own home life and family in addition to being a mercenary.

There is also something very cool about Vanessa that outshines a lot of similar characters. Because she was conceived as middle aged from the get go she already has her life together and so lacks any real uncertainty about herself. Vanessa has her own family and career and seems totally happy with herself. It is refreshing indeed to see a character so sure of themselves where their story is not about what they are trying to be but what they are about to do… and with Vanessa that is probably punch someone in the face.

Although Vanessa stopped appearing in The King of Fighters XI as a playable character she kept making cameos in the story sequences and backgrounds of later games so hopefully we have not seen the last of her yet.

If I had to only pick one character from this list I would pick Makoto, no contest. Makoto a fantastic design, she’s a short girl with short hair and actually has the muscle mass to back up her punches. She has her own Karate dojo that she is constantly trying to get money or publicity for and it is her motivation for every appearance she has made in Street Fighter.

Most of what can gather about Makoto comes from her introduction and winning poses, her taunts and her special moves. They are all unapologetically aggressive and direct, Makoto doesn’t mess around. Makoto’s most famous super since her conception begins with a punch straight at the neither regions. What is lovely is that over her appearances what little extra characterisation we get only builds upon this image instead of trying to mitigate it. What is Makoto’s hobby? Carpentry, because she is always repairing her crumbling dojo. What was her first alternate costume? The overalls she wears to repair her dojo because she has to do all the maintenance by herself because she runs her dojo by herself.

This level of effort even went into Makoto’s voice. Makoto comes from the Kōchi Prefecture of Japan and has an accent to match and Capcom went the extra mile and brought in a expert on the dialect to coach Makoto’s voice actor. Thus Makoto has a regional accent that has had actual effort put into making it sound authentic. Imagine if all video game characters had this kind of effort put into their design.

While all these characters are lovely and good examples of design, I don’t want you to leave this article thinking that fighting games are doing better than other video games. All these characters are but a small part of a large ensemble of casts that still have problems with representation in video games. The above list itself has characters from only Japan, America and Europe which is hardly appropriate when so many of these games revolve around supposedly international tournaments.

Men on the other hand, while not perfect by any means, seem to have a lot more choice then women. In Street Fighter alone if you don’t like vaguely muscular, stoic Ryu or the abstractedly muscular, blonde Ken then you are not troubled for choice. You could pick the interesting extroverted Dee Jay, the dapper and cultured Dudley, the huge and one eyed Sagat or the stocky but speedy E. Honda.

Instead what I hope you take from this list is something to look at and remember the next time you are let down by poor female representation in games. It is possible. If people are out there making these characters and putting them in new games that is a small success that we can build upon and that is the foundation of real change, building upon our small successes.