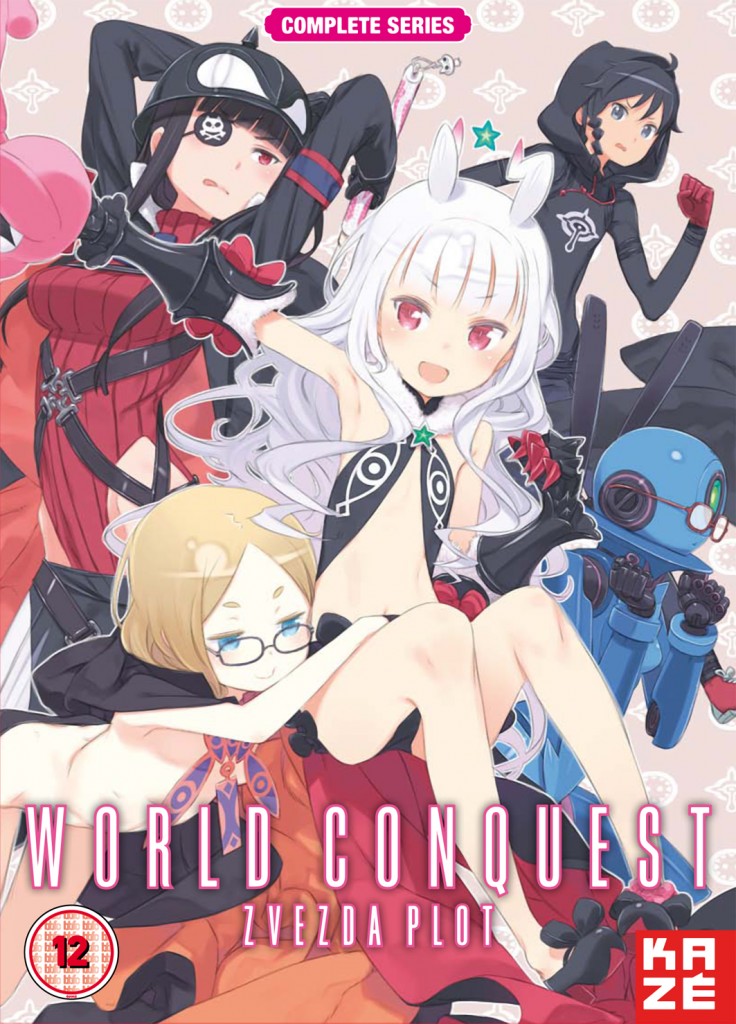 World Conquest Zvezda Plot, known as Sekai Seifuku: Bōryaku no Zuvizudā is a 2014 original anime produced by A-1 Pictures. The series was directed by Tensai Okamura, who has previously directed popular anime such as Wolf’s Rain and Darker than Black. He has also worked on key animation for an even more impressive selection including Ghost in the Shell, Neon Genesis Evangelion, and Cowboy Bebop: Knockin’ on Heaven’s Door. World Conquest Zvezda Plot was written by Okamura, alongside Type-Moon’s Metero Hoshizora, with character designs by Kouhaku Kuroboshi. The UK release of this series is brought to us by KAZÉ through Manga UK and is available on both DVD and blu-ray. The announcement of a Blu-ray version was a late decision, announced shortly before the originally scheduled release date of the DVD version. This delay was more than welcome, considering that the US did not receive a blu-ray version and the Japanese Blu-rays lack English subtitles. This release is a subtitle-only offering, but an English dub is really not needed when the Japanese cast includes Kana Hanazawa.

Asuta Jimon runs into the adorable Kate Hoshimiya when running away from home, for reasons unknown at first. Kate, leader of the Zvezda Plot intends to conquer the world and shape into the world that she wants it to be. A skirmish with the army and a rushed conversation fast force Asuta to become a member of this Zvezda Plot. Rather than jump into major plot development immediately after this, the focus is put on learning the other members’ histories, but each episode makes sure to have something to conquer as well. There are three parties that produce much of the interaction in World Conquest Zvezda Plot; Zvezda, the Government, and White Light. White Light is a justice squad tasked with protecting the citizens; their confrontations with Zvezda often end up more comedic than you would expect. Despite them being the opposition of our main characters, one member of their team, White Robin, is easily one of the best characters. When she’s not at work, she is Renge Komadori, one of Asuta’s classmates and his potential love interest.

While all of the show is an enjoyable viewing experience, with no bad episodes to be seen, most of the actual plot advancement, focusing on the unsavoury motives of the current Government, takes place in the final third of the anime. Highlights of World Conquest Zvezda Plot include Kate’s war on smokers in the third episode and the hot spring episode in which both Zvezda and White Light have company retreats at the same hot spring inn.

As a subtitle-only release, it’s good to see no major subtitle problems present in this release, though there is a slight issue on the blu-ray version. It should be noted that a joke in episode two could potentially have done with a translator’s note. The characters voicing is excellent, notably, Kana Hanazawa’s portrayal of the “black underwear and labcoat”-wearing Head of Science and Technology, Natalia Vasylchenko, and Misaki Kuno’s portrayal of the adorable world-conquering Kate Hoshimiya  The opening song, “Be mine!” by Maaya Sakamoto, is an enjoyably catchy song that fits well with the crazy antics that the show presents to us. The closing song, “Bijournania” by Aoi Yuuki is not as impressive, but a nice complement to the opening.

When it comes to this particular release, both the Blu-ray and DVD have technical issues, but the issues don’t seem to overlap as perfectly as one would expect them to. The DVD has noticeably jagged edges and a somewhat blurred image throughout. Despite this, the subtitles are easy to read throughout, aside from a short section of episode 13 when they move around to avoid Japanese credits. DVD chaptering is perfect, with the chapter marker that is missing from the blu-ray present. However, the blu-ray video is beautiful to behold, with smooth edges and a vibrant colour palette on show. Unfortunately, the black outline around the subtitles is not as thick as it could be, causing some issues focusing when layered on top of white, or other light colours. Chapters are flawed on the Blu-ray version, with there being no marker immediately after the opening credits. As long as you remember not to chapter skip past the opening song, you should be fine.

This release does include the OVA, listed as episode 13 on the final disc. Sadly though, this is the only extra made available, with no textless opening and ending songs; a shame considering how catchy the opening song is. Trailers for other KAZÉ titles, Future Diary, Mawaru Penguindrum, and Persona 4, play before the main menu appears.

Verdict
With such a charismatic group of characters, alongside outrageous technology, striving to change the world in a strangely comedic way, World Conquest Zvezda Plot is definitely worth giving a try. The vibrant colours look beautiful on blu-ray, and if you can deal with some issues focusing on the subtitles when in front of white images, you're certainly in for a treat.
The Show Itself
9.5
DVD Version
6.4
Blu-ray Version
8.4
8.1
A MIXED BAG
Start typing to see results or hit ESC to close
PlayStation 4 Steam Anime Limited NIS America Nintendo Switch
See all results